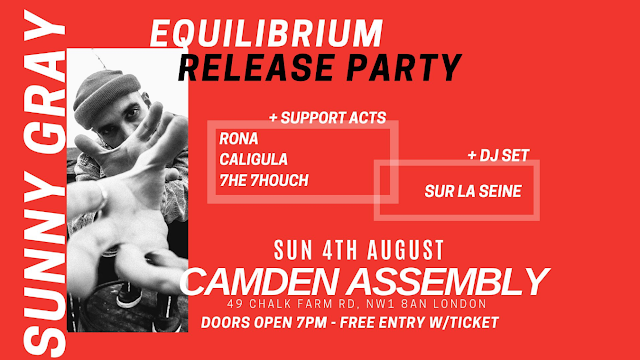 Previously we posted about Sunny Gray’s debut single, ‘Equilibrium’ – you can read that post here. This Sunday, Sunny Gray will be hosting the launch party for the track. The London-based artist will be will be performing live with his full band on an eclectic evening at the amazing Camden Assembly stage along with some thrilling support artists.

Sunny Gray self describes as ‘melantronic soul’, as his music touches on soul, blues and electronic music. From wall graffiti walls to acoustic and full band sets, the unique artist has left his fingerprints all over the streets of London. His music depicts the ubiquitous conflict hidden under the asphalt skinned metropolis. The city is a world on its own, silent yet resonating, where waves of electronic sound are tamed by Sunny’s warm and soulful voice.

Supporting acts will include Rona, who uses music as a language to communicate and express herself. She is both brutally honest and raw with her lyrics, while still capturing her feelings by melody and music. 7he 7ouch will be there, with guitar solos and vocal melodies dominating while bringing everything to the table from old school rock ‘n’ roll through to nu-metal. Finally, is the London based bluesy – rock trio, Caligula who will create a wall of sound that will shake your bones.

The launch party will be held at Camden Assembly, 49 Chalk Farm Rd, London and doors will open at 7pm sharp. Tickets are free, just remember to pick up your e-ticket via Facebook.