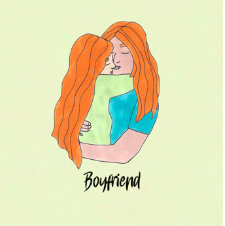 Rising newcomer CASEY LOWRY is at the turning point of his career. The indisputably British singer-songwriter continues with the momentum following the rapid success of recent singles Roam & You Told Me You Loved Me with ‘Boyfriend’ the newest instalment pulled from his upcoming EP due for release in September 2019.

‘Boyfriend’ is the infectious new single from upcoming indie-pop king Casey Lowry. As the prelude to his anticipated Autumn EP, the record recounts a humorous yet unfortunate moment with a girl and her new boyfriend. With its addictive guitar riffs and sing-a-long hooks, it’s set to be a future anthem for 2019s indie generation.

The new single will follow up You Told Me You Loved me which saw Casey in 12 New Music Friday playlists and Best of the Week, embedding him in the indie circuit scene with additions on leading indie pop playlists such as Indie List, Pop List, All New All Now, New Alternative, Chilled Pop Hits, Indie Arrivals and Indie Road trip.

Casey Lowry is a consistent campaigner for killer choruses with previous singles climbing in both the UK and Ireland Viral Top 50. Boyfriend is no exception having been produced by Lana Del Reys frequent collaborator, Tim Lacombe.

Set apart by his unparalleled ability to craft captivating lyrics, Casey consistently creates infectious melodies that culminate to a crescendo chorus. The multi-instrumentalist possesses an artistic maturity that is far beyond his years, making him a refreshing and exciting artist to watch.

Music has always been in Caseys DNA but it wasn’t until he reached the age of 14 that he wrote his first song, Trampoline. He tells you this almost casually – about a song that, on its release in 2017, was play listed at Radio 1, reached No 2 on Spotifys UK Viral 50 chart and has racked up more than 500,000 streams.

His debut EP, which included Me & You and Blank Face garnered attention from the likes of Wonderland, Dork and Clash, adding to his growing accolade of praise and resulted in a colossal 4,000,000 total streams to date. Fast-forward to April 2019 and Casey Lowry is a priority developing artist for independent label Access Records, part of First Access Entertainment, who house global talent such as Rita Ora, Bebe Rexha and rising star Kara Marni.

Casey maintains all the key qualities of a star in the making: unprecedented, with a dynamic presence that commands immediate attention. Still in the beginnings of his career, there is so much that is yet to come from Casey. With each release revealing another layer, he chooses to take the long way around, crafting new music entirely on his own terms.

Having only recently announcing a string of live shows for his September tour which will partner up with the release of his second EP set for an early September drop date, Casey is also preparing for a summer of live music.