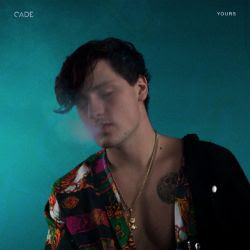 22-year-old singer/songwriter/producer mastermind CADE returns to Ultra Music with his newest single “Yours.” “Yours” is the perfect blend of breathy-pop music, indie guitar-driven melodies, and incredible energy, a testament to CADE’s diverse skill set across the board.
The young producer has an ever-growing catalog of impressive producer collaborations including the legendary Scott Storch and dance music’s favorite trio Cheat Codes. He’s also worked alongside the minds behind Max Martin’s music, Drake’s beloved single “Passion Fruit” and writers for Jon Bellion, Fifth Harmony and Meghan Trainor. On top of that, CADE has been commissioned for a slew of star-studded remixes including his take of Jason Derulo’s “Mamacita”, Maggie Lindermann “Pretty Girls (Cheat Codes x CADE Remix), which boasts a massive 525 million plays on Spotify, as well as remixes for J-Lo, BAZZI and Enrique Iglesias.
With over 4.7 million monthly listeners, CADE continues to gain global attention performing support and headlining at music festivals around the world with acts like Cheat Codes, Jeremih, Mike Posner, and through strategic collaborations creating hit songs with Cheat Codes.
CADE, whose sound resembles KYGO meets Blackbear, went from playing piano in his living room in Tampa, Florida, to his current home in the hills of LA – a testament to this young creative’s passionate drive and tenacity. The rising multi-instrumentalist made his project debut with the EP “Care” in 2016, quickly turning heads of fans and artists alike before writing and co-producing a few more successful collaborations with Cheat Codes including Stay With You, which has collected over 50 million streams, followed up the global summer, Warning Sign. Versatile and innovative, CADE has worked with producers Scott Storch, Bizness Boi, Drumma Boy, and notorious artists like LAUV, Enrique Iglesias, DJ Khaled, Cardi B, and Pitbull. On the horizon, CADE has collaborations with THEY, CMC$, DVBBS and an Ultra Music EP called Wolf Blue due in the fall of 2019.
To find out more about CADE, go to:
Facebook | Twitter | Instagram | Soundcloud