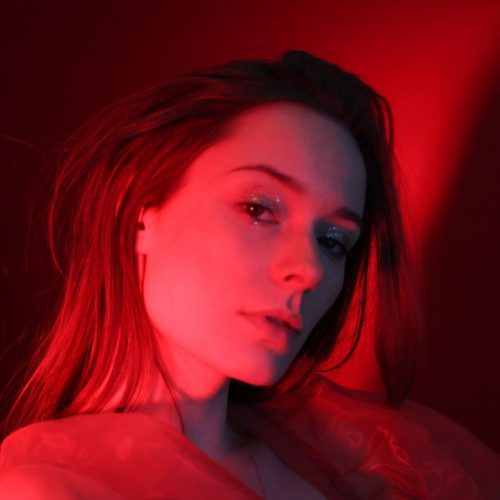 As she moves to bigger venues and festival stages, she is becoming a live act to be reckoned with. Dark, haunting melodies combine with deft guitar playing to create an ethereal, otherworldly sound that has drawn comparisons to Joni Mitchell, Billie Eilish and Massive Attack.

The first Artist I really remember falling in love with was Jack Johnson. I saw him on a video from a live show he did when I was about 12 and that inspired me to take up the guitar and perform. A bit further down the line, I discovered Joni Mitchell, in fact, I don’t even really remember when it was specifically. I was going down a bit of a rabbit hole of the 60s and 70s music and I just remember realising one day that I was a huge fan of hers all of a sudden. She definitely influenced my early vocal/writing style. As for production, I’ve only just started to think of myself in those terms, but I do remember the impact that Moby’s track “Porcelain” had on me and it’s still one of my favourite songs.

What are some of your key musical influences?

At the moment the stuff I’m listening to that’s influencing my material most is probably: HAIM, Lana Del Rey, Billie Eilish and 1975

It would probably be a scene set in outer space… but weird.. If there was a 1960’s Motel/Diner on the moon… Something like that… With neon.

I always put the melody first. Everything else comes after. But I do work with the production in mind for very early in the process. I always sit and write on logic just using it to play guitar or keys and vocals through, so I have the effects or the synths running right from the start and have an idea of the vibe from the beginning.

When I hear a PROPER good tune. One that gives you the fuzzies. It makes me wanna write straight away.

At the moment I only really know one scene and that’s the one in Manchester. Everyone here supports everyone else. It’s a great place to be a musician so I feel really lucky to get to do what I do.

My first big headline show was for my last EP launch and we sold out Deaf Institute in Manchester. It was amazing to play to a full house at a larger venue like that for the first time. I’ve played bigger shows since, but that one was really special. And the buzz you get from the crowd being fully involved in the music and singing along to your songs is like nothing I’ve ever experienced.

I played at Band On The Wall last year and when I played one of my new songs (I Could Make It Better) as a solo performance in the middle of the set (I was playing a full band show btw), the whole crowd erupted, and then the applause just kept dying down and then swelling back up, over and over again, as you get at much bigger shows. It was such an amazing feeling!

I just want to reach as many people as I can and hopefully make enough from each album so that I get to make another one… Anything else on top of that is just icing on the cake.

The plan is to release a string of singles this year on the run-up to an album at some point in the not too distant future. With everything that’s going on, it’ll probably be a little slower than planned, but everything is still in motion, and once lockdown lifts I’ll be back to full speed!