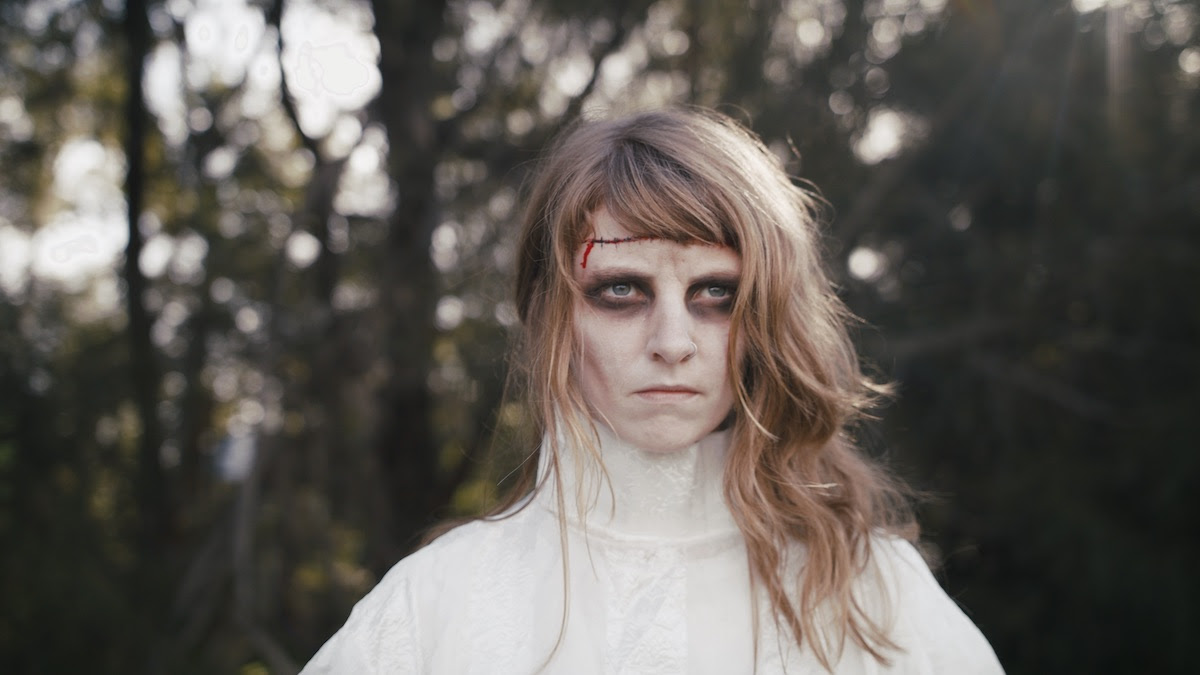 Fresh from Australian support slots with Joan As Police Woman, Bonniesongs, aka Bonnie Stewart, is pleased to reveal a ghoulish new video for her latest single ‘Frank’—an ode to the reanimated monster from Mary Shelley’s classic 1818 novel Frankenstein; or, The Modern Prometheus.
‘Frank’ is the latest track to be taken from the Australia-based Irish art-folk virtuoso’s forthcoming debut album Energetic Mind, set for release on Small Pond Records in the UK on 6th September 2019. Aussie experimental music label Art As Catharsis will be handling the release Down Under.
In support of the new record, Bonniesongs has also just announced a rare run of September 2019 UK tour dates supporting labelmate Natalie Evans (see below for full listings).
“I’m just trying to portray honesty, and imagination,” says Stewart of the often metaphysical inspirations behind her songwriting. “I’m someone who is led by heart not head. I’m a very emotive doer and thinker and I think this complexity of processing emotions comes out through my music. Where I might be singing about things like monsters or zombies, there’s a dark and deeper feeling that is more complex—whether that’s a sense of place, missing home, being misunderstood and underestimated, or nostalgia and old memories.”
Commenting on the hair-raising new video—which sees Stewart quite literally lose her head in a series of gruesome laboratory experiments before shuffling off around town as a zombie—she says: “It’s been so great to make music videos for a couple of the tracks. I’m a pretty visual person, so even when I’m writing lyrics, I’m usually picturing a scene or image. I particularly enjoyed making the video for ‘Frank’. We got to fulfill our lifelong destinies to dress up as zombie monsters and it was the best thing ever!”
The album’s lead single ‘Ice Cream’ (also out now) picked up international radio plays from Amazing Radio, Triple J, FBi Radio, and RTRFM, with press coverage from London In Stereo, Paste Magazine, The 405, The Line of Best Fit, CLASH, Crack in The Road, For The Rabbits, Nialler 9, Joe.ie, The Thin Air, Tone Deaf, Everything Is Noise, A Closer Listen, Overdrive Magazine, and a whole host more.
Energetic Mind is released 6th September 2019 via Small Pond Records (UK) and Art As Catharsis (AUS)
Bonniesongs live w/ Natalie Evans:
18.09.19 – Leicester – The Cookie
19.09.19 – London – The Islington
20.09.19 – Bristol – Cafe Kino
21.09.19 – Cardiff – The Dojo, Pontcanna
23.09.19 – Leeds – LS6
24.09.19 – Canterbury – Bramleys
25.09.19 – Brighton – Nowhere Man