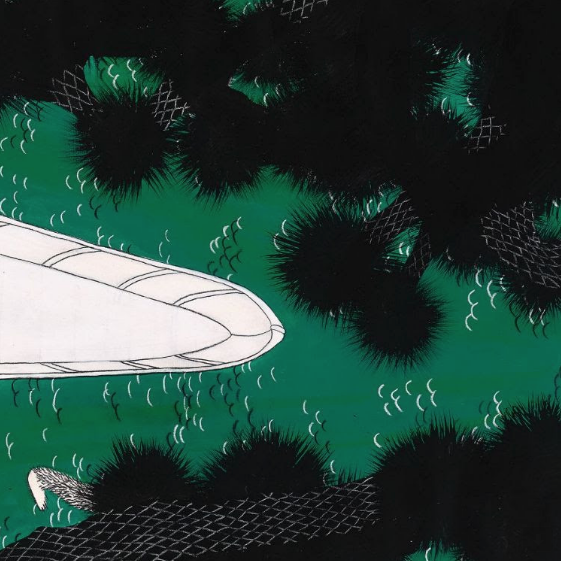 Oh Sees have announced the reissue of Thee Hounds of Foggy Notion which will be out 5/24 on Castle Face Records. The band also recently announced a run of Fall North American tour dates. You can check out where they are playing below and also check out their forthcoming Spring/Summer shows that include stops at Shaky Knees Fest and Solana Beach.

“Thee Hounds of Foggy Notion / Live Performances Sans Stages And Whatnots With Thee Oh Sees (2008), is a film we made just over a decade ago, and this record is the soundtrack. I loved making it, and I love all that were involved. I’m honestly blissed-out proud to hear over the years that it somehow is loved by so many others, too.

I first met John Dwyer on Flag Day. I was blown away by a trio of roving Coachwhips guerrilla street shows that climaxed at the the scenic vista parking lot high above San Francisco atop Mt. Sutro. Amongst the gathered uninitiated hordes of souvenir sweatshirt selling families, and puzzled elderly global tourist translators, and a white weirdo tuxedo wedding party, was the sonic corruption of the Coachwhips that was collaborating with the all-female, fake-pregnancy, jump-rope-y, real-pit-bull-shredding-fake-plastic-baby fantasy majesty of the performance artist crew Double Dutchess. I’m certain that this exact event was the idea seed for Thee Hounds Of Foggy Notion, and that it saved my life a little bit.

When JPD asked me to consider making a video for Thee Oh Sees with the sole stipulation that he didn’t want to do anything fake-y to playback, my head started swimming. What we mutually agreed upon was to essentially reprise Flag Day, and film Thee Oh Sees performing live, but not on stages. My own secret undisclosed personal caveat was to see this as an opportunity to document his process by mixing in some interstitial interviews between the roving live shows. He shut the ‘interview’ idea after I asked the very first question. Instead, what we got was infinitely more true to the free fun reality of the scene in the form of a multitude of glorious stories.

I rented a 15-passenger van, a generator, and the minimal cinematic equipment my trusted cinematographer friend James Wall deemed we needed. Everything sound wise was JPD territory and went through an ancient mixing board that Johnny had housed within a Samsonite suitcase. We ran all the plate mics from the drums, and the lil pedestal mics from the amps through this old mixer, and we all believed that all would be well and swell. As an emergency audio backup, I also grabbed a 12” Sennheiser directional mic in a fluffy wind muff that directly fed into one of our Canon XL-2s. My residual fear that the only thing that ruins docs or indie films is shit sound came true when we discovered that all the multi-tracking through the mixer was hopelessly covered in geiger counter static tics. All of the audio that you hear on the LP is sourced from that single Sennheiser mono mic that we then dual-mono’d in post.

As great as JPD is as a live performer, he was in absolute alpha epic story-teller genius mode during every single spare second of the journey. Brigid Dawson added some delicious gems as she always does. Petey Dammit is a pretty quiet private guy, but even he proved to be very funny when he gets loose. Patrick Mullins on the other hand is literally Castleface. After editing through 40+ hours of footage of live performances and interstitial stories, it became very shockingly clear to myself, and editor Akiko Iwakawa, that his expression never ever ever changes. He is Castleface incarnate.

It’s out on Castle Face Records May 24th