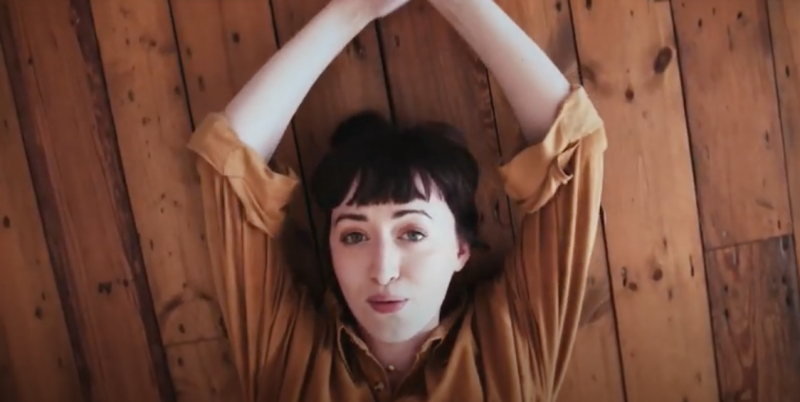 Maria Kelly premiered the video for her current single, ‘Martha’, on her YouTube channel. Directed by Tim Shearwood, who has worked on projects with the likes of Le Boom, Ae Mak and HAVVK, the video sees Maria playful in an empty room – a visual take on the song’s theme. ‘Martha’ was released on Maria’s label, VETA Music, and heralds her long-awaited debut album later this year.

Since its release just under a fortnight ago, on the 7th of April, the Westport alt-folk singer’s new single has surpassed 30,000 streams on Spotify, been played on Irish radio over 60 times, has been named Track of the Week on 2fm, been added to the coveted RTÉ Radio 1 Recommends list and received high praise from music journalists across the country.

Of the video, Maria says: “‘Martha’ is all about feeling stuck in that part of your early twenties, where you’re not who you were and not quite who you’ll be yet. And it’s about dealing with all of the change, restlessness, and confusion that comes with that. There are so many difficult parts of that process, but I wanted this video to explore the fun that still exists in that period of time – feeling stuck and unsure, but finding ways to make yourself laugh anyway.”

Maria Kelly’s world of delicately woven alt-folk is laced with a sincerity that cuts to the bone. Finding comfort in the confessional styles of artists like Regina Spektor, Daughter, and Lucy Rose, she soon transferred her own introspections to music, developing a sound that is as delicate as it is disarmingly frank.

A number of critically acclaimed releases on Veta Records have been accompanied by shows across Europe supporting the likes of James Vincent McMorrow, KT Tunstall, and Paul Noonan (Bell X1). Maria quickly became known for her heart-wrenching live performances, unassuming humour, and a ‘pin-drop’ vocal that is impossible to ignore. Maria’s work has continued to gain momentum internationally, rallying support from Mahogany, Consequence of Sound, and The Line Of Best Fit along the way.

After laying a foundation in the Irish music scene, Maria relocated to Berlin in 2018, a life-changing move that inspired her four-track EP, ‘notes to self’. Her stint in Germany saw her join All The Luck In The World on a month-long European tour, followed by her debut TV appearance on Other Voices Ballina. Maria finished up the year with two sold-out shows supporting Villagers.

2019 saw the release of ‘i leave early’ – a captivating track that showcases Maria’s continued development as an artist and one which quickly garnered more than a million streams on Spotify.

With the world at a standstill, 2020 saw Maria retreating to a small cottage on the south coast of Ireland. During this quiet in-between, Maria has found space to write and record her eagerly anticipated debut album – a blank canvas and an open sea with which to take stock and reflect on her 20s so far.